The Isted Lion (Flensburger Löwe) is created by the Danish sculptor H.W. Bissen in 1859-60 commemorating the Battle of Isted in 1850. The lion was revealed on the 12th anniversary of the Battle of Isted, July 25th, 1862.
The money for this was collected by a national collection.
The memorial was erected north of the large burial mound, which was recently tmade on Sct. Maria cemetery, where many of the fallen warriors from Isted were buried.
On the front: Isted / On July 25th, 1850 / The Danish People raised this memorial.
On the sides of the granite shelf were attached 4 portrait medallions by the generals: Helgesen, Schleppegrell, Krogh and colonel Lässöe.

After the Prussian troops went into Flensburg in the winter of 1864, the mob tried February 28th to turn the statue over, but only managed to damage it. The lion was severely damaged and the head fell off completely. However, Prussian troops prevented further damage, and in 1867 the lion was transported to Berlin.

The Isted Lion at The Berlin Zeughaus

On February 9th, 1868, the Isted Lions were reinstated, first in the Zeughaus (Army magazine) in Berlin and then in April 1878 is was moved to a place in front of the Military Cadet Academy in Berlin-Lichterfelde.

While the lion stood in front of the Cadet Academy, it has been able to measure up to historically known students such as: Walther von Brauchitsch, Franz Joseph von Bülow, Hermann Göring, Erich Ludendorff, Erich von Manstein, Gerd von Rundstedt and Manfred Freiherr von Richthofen who all has been educated here.

The Isted Lion at Berlin-Lichterfelde

In 1945 the  statue was found by a journalist from the Danish newspaper Politiken. It still was on the place from 1878, but the academy was now baracks for the SS.
The lion was returned to Denmark by General Eisenhower’s personal intervention and transported to Copenhagen by the US military.

After its arrival it was mounted in front of the Danisk Military Museum, where it stood quite unnoticed until 2010. In the meantime there had been several ideas for an more spectucular location in Copenhagen
However, it was not moved until 2010.

In 2009, the Flensburg City Council addressed the Danish state with a project about mounting the Isted Lion on its original place on Sct. Maria Cemetery in Flensburg.
This the government agreed to it, but before it could be moved, the lion had undergo a much needed restoration in 2010. 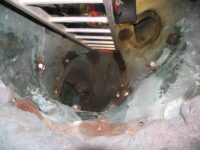 The interior of the Isted Lion 2010

The statue is made up of seven parts that are internally assembled with bolts. It was these bolts and fittings that was changed by the Danish National Museum.  At the same time, the surface was renewed with a brownish coating.
Access Access to the lion’s interior takes place through the upper part of the head. 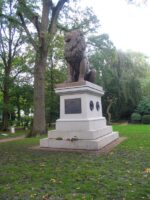 The Isted Lion at Flensborg

Istedløven at Flensborg Cemetery 2010
September 10th 2011, the Isted Lion returned to its original site, 147 years after it was removed. It looks great on the park-like old Flensburg Sct. Maria Cemetery where it looks majestically over the many war graves, Danish and German, from both the war of 1840-50 and 1864.
Hopefully the last chapter is now written in the Lions travel diary.