In Germany, there were soaring thoughts about a common identity and in 1848 Jakob Grimm’s “Geschichte der deutschen Sprache” was published. It was not the first, and certainly not the last, time culture, language and pupolation was used as an arguments for political actions.
Grimm, a well-known linguist, wrote in his preface:
“Lorraine, Alsace, Switzerland, Belgium and the Netherlands are part of our (German) empire. In just a few generations, only three European peoples will be in power: the Romans, the slaves and the Germans.”
Denmark also got some remarks:
“When the great federation is formed, why should the disputed (Jutland) peninsula not be added to the mainland …. As soon as Germany reorganizes, Denmark cannot possibly exist as before.” This was a scientific German view.

In Denmark, however, two attitudes were common.
The Conservative unified State Policy and the National Liberal Ejder Policy.
The unified state people would preserve the Danish-German state with the Danish king as duke in Schleswig and Holstein. These people emphasized the importance of the state as a whole, but their policy did not take into account the national opposites that had actually arisen in the region.

The Eider people (named after their claim af Denmark to the river Ejder) wanted the duchies separated , so the German oriented Holstein was separated and continued as a member of the German Confederation, while Schleswig was to remain part of the Kingdom of Denmark.

In doing so, the border would go by the river Ejder, which in the Middle Ages had been Denmark’s principle southern border, although it was of no practical importance during the many centuries when Holsten and Schleswig were administered together.

Schleswig and Holstein were better financially developed and more prosperous than the rest of the Kingdom of Denmark. The duchies amounted to approx. 2/5 of the kingdom’s population, but financed approx. 3/5 of state spending.
Many in the advancing middle class saw their benefit by being attached to the German territory. Denmark was still affected by the poverty after the state bankruptcy in 1813 and had only a modest industrialization and a backward agriculture. It only reached during the 1830s the scale of production that agriculture had had before the Napoleonic Wars and the state bankruptcy. The population of the duchies, also in Schleswig, traditionally looked down on the population of Jutland in the north, who were perceived as a brake on growth and innovation.

The revolution of France in February 1848, were streading to the rest of Europe.
In March 1848, King Frederik the 7th. was under pressure from the Danish people, and formed the so-called March Ministry under with the aim of preparing a democratic constitution for Denmark.

The formation of a constitutional ministry was directly derived from the Schleswig question, when a representative of the German-minded Schleswig and Holstein local assemblies came to Copenhagen on March the 18th. with a demand for the dissolution of the duchies.

In Germany, there were different thouhts about Europe and Germania, thoughts that might have prompted some ideas about the duchies extinction and future attachment to the German Confederation.

In Copenhagen, this meant that the national Liberals could remove some of the conservatives from their political posts and take over the political power in Denmark on March the 22nd. 1848.

On March the 24th. the new government sent the deputation from Schleswig and Holstein back with the message, that Schleswig could not get detachment from Denmark, but a form of inner independence or self-government was offered. Holsten, on the other hand, was given “as much freedom as they could wish”.

Meanwhile, the rumor in Kiel said the Danish King had been taken prisoner by the “mob” in Copenhagen. Key figures in the German Schleswig-Holstein movement took the opportunity to detach the two duchies.

The rebel government in Kiel

On March the 23th. 1848, German officials, officers and citizens proclaimed a provisional Schleswig-Holstein government in Kiel. Officially, the Provisional Government was established as a consequence of the allerged development in Copenhagen, claiming to represent the king’s power as long as the king had no freedom of action.
There is no doubt that the rebel government, in practice, would incorporate Schleswig and thus the whole Schleswig-Holstein area into the German federation, something that the Danish government and king would never allow.
There are two historical interpretations of the circumstances. One possibility could be that confusion and poor communication could not dispel the rumors, meaning that Kiel believed that the revolution had broken out in Copenhagen. Another possibility is that the rumors provided the pretext that allowed the rebels to exploit the situation with a touch of legitimacy and get the popular understanding.

The next morning, March the 24th. the Provisional Government issued a proclamation demanding that Schleswig and Holstein were united in one state state in a personal union with the Kingdom of Denmark. The Provisional Government declared it its task to defend the dukes and the duke (king) from abuse.
The message was clearly non-revolutionary. It helped to make the rebel government recognized as legitimate by most state officials and almost all the major cities in the following period.

Members of the the rebel government

The rebel government in Kiel expected the government in Copenhagen to fight it by force. It quickly built and equipped a usable army with the purpose of securing the fortress of Rendsborg, the strongest military garrison in the Danish state with a large arsenal of weapons. 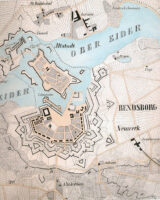 On the morning of March 24, the regular train from Kiel drove over Neumünster to Rendsborg with the soldiers from the garrison in Kiel and 50 volunteers under the command of the Provisional Government’s Minister of War, Frederik of Nør. He was the brother of the Duke of Augustenborg, who hoped to succeed as regent of Denmark and the duchies after the childless Frederick the 7th.
This was, however, thwarted by the open letter from Chr. VIII, which in 1846 determined the succession for the throne in Denmark and the duchies.

The newly constructed railroad from Neumünster to Rendsborg accidentally went through the outer fortifications of Rendsborg. The prince of Nør and his people could therefore drive the train directly into the fortress, where they quickly occupied the command of the guard and other important points. 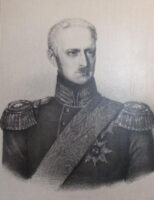 By ringing the fire bell, they gathered the unarmed soldiers of the fortress on the parade ground.
The Prince of Nør, who was in Danish generals uniform, gave a speech in which he stated that he and the Provisional Government of Kiel had taken over the reign of the duchies, because the duke’s rightful regent, the King of Denmark was held captive by the Copenhagen mob.
Officers and soldiers who wanted to travel to Denmark were given free march. Most of the officers chose to travel to the north, while the vast majority of privates and NCO’s joined the rebel army.
The people of Denmark were outraged and the belief in the Danish army unwavering.