We know a lot more about the flash signal network. Presumably this was a coded morse system, broadcasted with carbide floodlights. A number of flash signal stations were listed. Both as towers and buried in high placed burial mounds. Holes were then dug into the side so the light signals could be emitted. 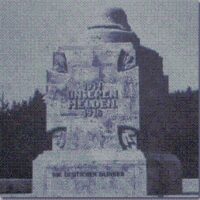 Memory for “The fallen Blinker”

The light source was a carbide projector with a light opening of approx. 0.5, meter. These included an acetylene tank and an oxygen battery. The flashes were generated by a flap being inserted between the flame and the hole mirror. It has been said that in the bright sun you could read the flashes 15 km. away by using binoculars.

Several reports tell us,  that the flash signals were the most effective and reliable field communication tool of the time. Signal rockets did not fire during artillery fire, telephone wires were vulnerable and field radios were still not stable.
A flasher, with his ability, skills and central function, was an obvious target for artillery or sniper. Recognizing their great importance, a memorial to “The Fallen Blinker” was dedicated in Jena in 1921.
This memorial has later been restored.

There have been both mobile and stationary radio stations.
We know some: the Tamdrup Hights west of Årøsund, Haderslev west, Knivsbjerg, Rödekro, Geestrup, Toftlund and the Zeppelin Base at Tönder.
Tamdrup Høj, Tønder and Rødekro were permanent stations.
Rødekro had 5 wooden masts at a height of 85 meters. These were later taken over by the Danish army. Two of the masts ended up in Viborg, two in Copenhagen, tho half-masts in Odense.

The Railways:
During World War I, railways became the primary means of transport for both personnel and equipment. Without the railways, the war would not have reached the extent it was allowed.
Long before the war, preparations had been made for military transports in the then Schleswig railway hubs. In some places already at the track’s design, e.g. the long loading ramps in Over Jerstal and Skærbæk.

The Railways were in widespread use during the construction of the Sicherungsstellung Nord, both for the transport of building materials and transport of the artillery itself.
Work was done on three different tracks (different track widths)
The national railway network, county railways and field tracks. The national network  consisted of two longitudinal lanes with secondary railways.
From here, there were military railroads to the  24 cm. batteries. 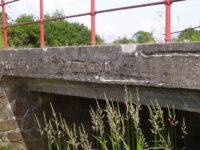 The Floodings:
Some large flood plants were prepared to flood the areas in front of the post. Except for the 16 voice works and dams that were either completed or started, little is known about these floods. We thus do not know which areas should be made difficult passable or how long it would take. However, one must assume that these are filling times of several (many?) Days.
The only remaining structure from the planned floods is the Pioneer Bridge at Bevtoft. built by Ersatzpionerkompagnie 10 in 1918. This bridge was part of the chain of the flooding works.