The Battle at Selk (Kongshøj – Königshügel) 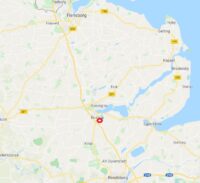 A number of outposts were located in front of Dannevirke, among others. a. in Selk, Over Selk and in Jagel. On February 3, 1864, heavy outposts were fought in this area, with Prussian and Austrian troops advancing in the space between the Austrian k.k. VI Army Corps and the Danish Army.

Before there have been outpost matches at Eckernförde and Mysunde was tried on February 2.

Especially the fighting at Kongshøj (which the Austrians called Königsberg) at Selk became particularly fierce. From this peak, the road between Eckernförde and Schleswig as well as the entire Dannevirke’s eastern wing could be mastered.

While both the Austrian Crown Prince and Prince Friedrich Carl watched, the Austrian army attacked the Danish outposts. At the forefront of the attack is “K. 1st Infantry Brigade General Major Graf Gondrecourt”, which shows great initiative. The Austrians attack while there is Danish guard release and thus double staffing in the outposts.

This could be a Danish advantage, but due to poor leadership it causes confusion as the outpost companies come from 6 different battalions. After 6 hours of fierce fighting in temperatures down to -19 degrees, the Austrians occupy Kongshøj as they occupy heavy artillery. The Austrian general does not want to move any further that day, but several units of the Austrian troops are so excited by the fight that they moved on towards Dannevirke itself.
The storming Austrians fled several Danish units, but came so close that they came under fire from the Dannevira position itself. They then had to retire with heavy losses.

However, Kongshøj and most of the forefront of the Dannevirke stronghold were now in the enemy’s possession, and the Danish army was withdrawn to the positions behind the Dannevirke.

The losses had been tough on both sides. Nearly 100 Austrians are dead and over 300 injured.
On the Danish side, there are 42 dead and approx. 150 wounded. In addition, more than 200 men on the Danish side were either taken prisoner or missing.

Despite the heavy losses, the Austrians celebrated Königshügel as a great victory, and the Brigade Gondrecourt is then nicknamed the “die claimant Brigade” – the Iron Brigade.

After the capture of Kongshøj, Dannevirke is now so threatened by the fighting that the decision to vacate the position is already taken the day after February 4 in the evening.