It has often been claimed that the Danish defeat in the Danish-Prussian war was due to the Prussian breech loading rifle. They were effective, especially in the battles  where the infantry was in direct combat. However, the decisive factor in 1864 was the superiority of the Prussian artillery in terms of both number, range and accuracy. 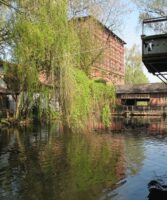 But no doubt the breechloader played its role. Admittedly, both the Danish muzzleloader and the Prussian breechloader only had a shooting range of approx. 600 for both. On the other hand, a Prussian rifle gunner could deliver 3-4 shots while a Danish soldier only delivered one. Furthermore, the breechloader could both shoot and be reloaded by a soldier lying or kneeling.
The Danish soldier with the muzzleloader had to stand up every time he should reload. In doing so, they became more visible targets. On the other hand a great deal of the officers still thought, that a real soldier was standing up and receiving the fire  during the battle.

The Prussian breechloader rifle was constructed by a smithy, Johann Nikolaus Dreyse.
Dreyse, a trained smith, first worked in Germany and then from 1809 to 1814 in Pauli’s Gun Factory in Paris, after which he founded a hardware factory in Sömmerda in Thuringia.
Here began to develop and modernize existing rifle structures, i.a. in 1824 he improved the construction and ignition of the ignition caps and then set up a ignitioon prison cap factory under Company D. & Collenbusch in Sömmerda.
He worked diligently to construct a unit cartridge for rifles, i.e. a device that should contain both bullet, gunpowder and igniter. This led in 1827 to the invention of the breech loading needle gun.

The first prototype was to be reloaded like the already known muzzleloaded rifles, but in 1836 this changed  to breechloading.
The rifle was tested by various Prussian units from 1839 to 1840. This progressed satisfactorily, and on December 4th, 1840, Dreyse received the order for 60,000 breechloaded rifles and associated ammunition. 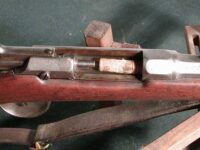 The production of these rifles, called “leichtes Perkussionsgewehr M / 41” (Light Percussion M / 41 rifle), commenced in the spring of 1841 in Dreyse’s newly refurbished factory in Sömmerda. The rifle was considered a state secret.

After delivery, the rifles were stored in Berlin’s military magazine. Here they lay until 1848, when, during a revolutionary uprising in Baden and Saxony, they were handed over to the Fusilier battalions of the line regiments. The includingnow were tested for real in the streets.

The next time the rifle was used in combat was in the Danish-Prussian war in 1864, with great succes.
In 1864 Dreyse was honored for his efforts.

The muzzleloader
Until the breechloader made it possible to load the rifle by putting a cartridge containing both gunpowder, cap and bullet into a chamber, it had been very troublesome to load a muzzleloader.
The following describes how a muzzleloaded rifle, which in 1864 was the standard weapon of the Danish infantry, should be loaded according to miltary procedure.
Due to the slow loading the rules also stipulated that one half of the unit should have charged before the other half fired.

The rifle is put between the knees with the pipe facing up.
A cartridge is taken out of the cartridge bag,
the cartridge is brought to the mouth. and the bent paper spout is bitten and the powder (8 grams) is poured into the barrel.
Insert the cartridge into the muzzle and the paper is teared off.
The charger is pulled out of its gutter and placed against the bullet in the muzzle.
The bullet  is pushed into the bottom of the barrel with a long, smooth movement. The bullet is erected  around the pin with 2-3 short strokes and the charger is pulled out.
The charger is placed in its trench the rifle  and is dropped.
The male is put in a middle position, the piston is wiped off.
A cap is taken out of the cap, placed on the piston and pressed firmly.

The male is unsecured and the rifle is ready for firing.

The first spark plugs had some initial problems. Among other things, the chamber was very quickly leaking, whereby part of the gas pressure disappeared. The igniter (the needle) itself also had a very limited service life, as it was in the midst of the explosion in the chamber at each firing.

The first rifle, M / 41, which was probably the one used in the Second Schleswig War, had the following specifications.

Soldier shows off his Dreyse rifle

After 1864, the Danish army began to convert the muzzleloaders to so-called chamber chargers.

Prussia and the other major European military nations began to look for other and better systems than the Dreyse rifle. This very quickly led to better brass cartridges and the opportunity for multi-cartridge magazines.

Already before the German-French war in 1871 a great development had taken place, and soon the first magazine ripples appeared.