From February 1st, the second Danish-Prussian war broke out.  It was, in fact, a reopening of the First Danisk-Prussian war 1848-50, just with some extra ingredients.

Bismarck, directed very purposeful towards the conflict. The duchies Schleswig, Holstein and Lauenburg  were the alibi, the fact was, that he had major domestic political problems, among other things. with the time of conscription. He therefore needed some headwinds, and a foreseeable conflict with Denmark over especially Schleswig was tempting.

Unfortunately Denmark willingly played Bismarck’s games. Still overwhelmed with the overestimated victory over the rebel army in 1850, Denmark believed that the army in connection with Dannevirke could assert itself.

With the Danisj November Constitution, Bismarck got what he needed, and after the obligatory diplomatic and political game, the war broke out on February 1st, 1864.

Denmark was not minded to hold on to Holsten, but would noy let go of Schleswig and therefore  quickly retreated to the defense of the area in front of the stronghold Dannevirke and the position itself.

Prussia and Austria were planning a quick war. It should last 3 days.
The first day the plaN was to reach Mysunde (the Prussian army) and the areaS between Rendsborg and Dannevirke (the Austrian army)

Cutting ice at the Slien

The second day the fjord Slien was to be crossed by the Prussians for the to advance towards Dannevirke’s left wing. At the same time, Dannevirke’s center positions and the Right Wing should be attacked to keep the Danish troops here.

On the 3rd day the stronghold itself was to be attacked from the left flank (the Prussians), The troops should be bypassed and defeated, while the Austrians kept on attacking the center.

This was devastated by the fierce Danish defense of Mysunde, so that the crossing over the Slien had to be moved east to Cappeln and hereby delayed.

This offered time and opportunity to draw the Danish troops unnoticed away from Dannevirke, the night between february the 5th and 6th.

Mysunde was considered a Danish victory in Copenhagen and contributed to some optimism. For the same reasom the retreat from Dannevir had the opposite effect.

During the retreat, the Danes managed to keep the Austrian cavalry away from the Danish rear in the battle at Sankelmark. This battle, too, in the midst of discouragement, was also considered a Danish victory.

At the same time, a major battle took place with the Austrian infantry at Selk (Kongshøj) during which the Danes had to retreat towards the Dannevirke stronghold.

The Danish retreat from Dannevirke

After Dannevirke was abandoned, the Danish troops now moved back on foot to the Dybbøl stronghold  just west of Sönderborg, towards Fredericia fortress and north towards the Limfjord. This strategy had worked excellently during the 1 Danish-Prussian War, which gave the advantage of the opportunity to carry troops back and forth along the eastcoast og Jutland where Denmark had the naval superiority.

After launching the bombing of the Dybbøl redoubts from Broager at the beginning of March, the Prussians was  building up a larger and larger siege force around Dybböl.

The Danish outposts have been thrown back into the position, and Dybböl was in fact besieged. 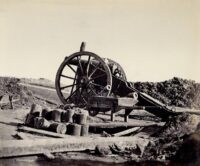 A destoyed redoubt at Dybböl

Following a heavy bombardment on  April 14th, which was followed up by the final bombardment with subsequent attack and occupation of the stronghold on April 18th. 1864

Following this, there was a brief ceasefire, and when that expired, the Prussians was ready with an assault force that crossed the narrow Alssund on June 29th.

After some hard fighting, the Danes was forced back to Høruphav at the island of Als south coast ,from where all Danish troops was evacuated to the Funen.

Fredericia followed the orders from Copenhagen and surrendered without a fighting to the Austrians.
Now only the Danish troops in Northern Jutland were left. These had no further significance in the war.

The last fighting in the war, was the battle at Lundby, where at Danish company was almost slaugtered, due to its commanders inconpetence and his search for glory before the war ended.

The war ended with the peace in Prague in 1866, after which the three duchies were passed to Prussia.