Ludendorff wrote in his memoirs: 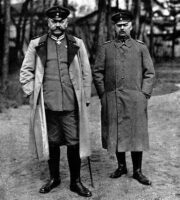 “It was only with the deepest regret that we could not say in favor of the unrestricted submarine war, as it could, in the opinion of the Chancellor, possibly lead to war with the Netherlands and Denmark. To protect ourselves from both states, we did not have a single man available. They would be able to move into Germany with their armies, even if they are not in war, and give us the death toll. “

In September 1916, the Deputy General Command for the 9th Army Corps received an order to establish Security Position North according to plans that had been in place for a long time. September 10 and 17, 1916, the first pioneer troops arrived in southern Jutland. The work was carried out by a Pioneer Battalion Staff and six Pioneer Companies. The workforce was military and political prisoners (Festungshäftlinge).

The plant was based on the common doctrines of defense fighting that were written down in 1916 in the regulations “Die Führung in der Abwehrschlacht” and “Allgemein über Stellungsbau”, which in addition in modernized form applied both during and after World War II.
Construction of the facilities took place from September 1916 to the end of the war with varying intensity. However, the front positions as well as the artillery positions were largely completed by the end of 1917. Judging from the location of the heavy batteries in particular, it seems the strenght of the stronghold lies in the eastern part of the area. This is possible on the basis of a desire to protect the important naval installations at Aabenraa and Als.

Should a more western front axle (after a descent in Esbjerg ???) be chosen, the railway network enabled the supply of artillery barrels with railway guns.
No major support points are seen in the plans for the stronghold. This may be due to either lack of preparation, the lack of ability of the German reserve troops or an expected lack of fighting ability of the Danish troops (cf. Ludendorff’s comments on these)

Twenty-two light and medium-weight batteries of caliber between 7.7 to 15 cm, eight heavy batteries of naval guns of caliber 24-26 cm and a large number of light and medium field guns and revolver cannons were erected (cf. the Danish records in 1921). in flanking bunkers in connection with the infantry positions.
In connection with the infantry positions, observation and combat stations, machine gun positions, field cannons, and a lot of covered crew rooms (Unterstände) were built.
The approx. 800 crew rooms could accommodate 8000 men lying, or double the number if just seated.

Only the front infantry line was completed. The 2nd and the 3rd trench lines were only marked , after which they had to be completed by the units that were to fight in the stronghold.

Admittedly, the official Denmark denied that there was anything going on in the area, but the fact is that the position was one of the strongest positions the Germans built, including the more famous ones on the Western Front ). But in the north they could built as in peacetime.
Unbeliveable that the Danish army og government didn’t know about it.

In the Hønning-Øster Gasse section, the work was led by 9. Ersatz-Pionerkompagnie from Rendsborg. The prison camp from which the work crew came was located just west of Arrild. The work around Skærbæk was also led by part of the 9th Pioneer Company (later 139th Pioneer Company). In addition to state prisoners, he also worked in the 139th Armierungs battalion from the Westphalia.
To give the impression of the numbers of building materials that needed to be moved, the materials to a normal small posterium weighed about 150 tons and a half platoon room approx. 450 tons.

It has thus been a very large construction project at a time when Germany  in every ways was queezed, not only militarily in the east and west, but also on the home front where hunger spread among the population.