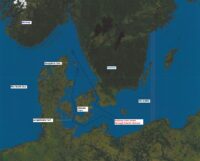 Denmark’s position as the “plug in the Baltic” was vital to both the NATO and the Warsaw Pact throughout the Cold War. The only way out of the Baltic was through Danish waters. No transport or warships could pass through Danish waters without either being observed or fired. Towards the Baltic, two new coastal forts were built in the early fifties.

Location of the fort
At the Southern end of the island of Langeland,  170 acres of land was bought for the purpose on March 22nd 1952.

The existing buildings of the property were extended to the barracks.
14 major buldings were constructed in reinforced concrete:
– 4 cannon positions with underlying crew and ammunition spaces.
– 2 bunker systems for power plants with diesel generators for emergency power supply.
– 1 command and fire leader piles.
– 6 close-range batteries with fire management tower and underlying crew and ammunition
rooms.
– 1 advanced fire chief piles on the coast east of the fort.

The Ammunition magazines and transport routes were flameproofed, operation and command centers were gas-protected, vital plants were shock-proofed and machine bunkers were equipped with radioactivity alarm systems. All bunkers were fitted with steel doors and the entrances were closely defended.

The fort was up-to-date protected from both naval bombardments and air strikes with conventional weapons. The plants were gas protected partly with a slight pressure inside the buildings by means of the ventilation and partly with special gas filters. 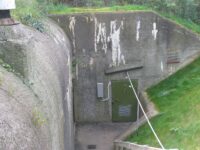 To secure the power supply to the fort, two machinery exchanges were arranged in the northern and southern parts. They were equipped with diesel engines to power the emergency generators. There are two B&W 56 hp diesel engines each pulling a Thrige-Titan 380 V generator. The third engine is a US generator unit, UD 24. The diesel engine part is made by International Harvester.
Only the Southern Machine Center is accessible, with the Northern being a radar station for the water monitoring.

In connection with the machine section there was a machine-gun position for close-range defense. They came to it up a flight of stairs at the entrance to the machine station. It was armed with a 7.62 mm. machine gun M / 62. This position was supplemented by shooting holes in the area.

For the use of the fort’s crew, which in war cases would be well above the 400, weapons were stored in the small arms magazine. 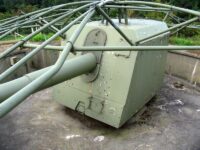 The cannons were mounted in the Küst MPL C / 36 off-shore for installation on land by the coastal defense. Although the year of construction is 1928, at the time of construction it was a full-fledged piece of artillery, clearly in line with other countries’ constructions. At the end of the war, the Germans had built a battery on Fynshoved at Funen, and from this came the four cannons that were installed at the Langeland Fort.

The guns were manufactured by the Skoda factories in Pilzen, Czechoslovakia.
Around the turn of the year 1944-45, eight guns of the type 15 cm SK C / 28 were sent to Denmark. All were without shields as steel fabrication could not be obtained. The shields are first mounted on delivery to the Langeland Fort.

In 1957, a 127 mm P.K. was mounted at the beach. L / 45 M / 1934 as the lighting gun for the battery. The shooting practice proved so bothersome to the residents that in 1962-64 a beach battery was built with two 150 mm guns as the main battery. These two guns came from another German battery, Hesbjerg at Gilleleje, and had arrived in Denmark at the same late stage of the war.

In 1973 the main battery was preserved for a long time, but crews were still being trained to operate the guns.
The guns were placed in four positions in a north-south semi-circle  parallel to the coast, with 1 cannon in each with associated ammunition and crew facilities. The guns had a shooting range of 22 km which is far enough to cover the waters of the island of Lolland. A gun with a well trained crew  could deliver  6 shots per. mine. The grenade weight was 45 kg and the grenades had great armor-breaking effect.
The cannons had accommodation for the crew of 15 and ammunition magazines in a concrete plant under each gun emplacement From here, the ammunition could be brought up to the cannons with a lift.
By maintaining a constant pressure throughout the fort, the intrusion of ABC combat materials was countered. This also included gas filters
There was accommodation of the cannon’s 15-man large crew in the concrete plant under the pamphlet. 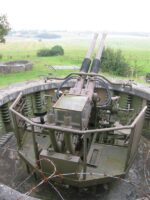 For the aircraft interception, the fort had two stationary  batteries, 1 (north) and 2 (south), located at the north and south ends, respectively, of the line in which the four 150 mm guns lay.
Their primary role was to defend the fort against air strikes. But the cannons could also be part of the fort’s close-range defense and used to shell targets on the ground.
Each battery consisted of three mounts, each of which two 40mm AA-guns in a dual-deployment.
The guns, of the type 40 mm R.K.L./60- M / 1936, were an American model of the Swedish Bofors gun.
They were given to Denmark as part of the US weapons ais under the Marshall Plan.
The same type of anti aircraft guns had been installed on most of the Danish major coastal and naval forts.
The AA-guns had an effective range of 2,000 meters to air targets and 4,000 meters to ground targets. Each of the three guns in the battery could deliver 240 shots per minute.
In the system under each battery were three compartments, a magazine, accommodation and a fire control center.
The fort was also equipped with about 20 pcs. mobile 40 mm. AA-guns so they could be placed where it was found necessary.
The guns themselves were of the same type as the fixed AA-batteries.