Danish Surrender and the Peace

It was a very depressed Denmark the soldiers returned to. This is clearly reflected in the king’s, Christian IX, proclamation:

Soldiers!
The fight is over! From the bloody journey of war you return to the work of the home.
Heavy sacrifices have cost the war – with even heavier sacrifices peace must be bought. But the Fatherland’s well-being prefers peace to a continuing struggle.
I know that your courage is unabated – I know that the army is still prepared to take up the fight against the enemy – but we do not control the fallout, and while fighting, the predominant part of the country is in enemy violence and is under pressure which will soon lead to Destruction. Therefore, the struggle must be ended, albeit with the relinquishing of parts of the country that from ancient times belonged to Denmark and to which every Danish heart is attached.
For you, Soldiers! the outcome of the battle is doubly heavy. You fought and your Blood River for a Case we have now had to give up.
But with honor you go out of the fight. It must be acknowledged that the task which was first given to you was more than difficult; against two Armies’ armies you were but a small crowd. Any hope of help failed, the enemy’s force forced you back, but neither his power nor the harshness of winter crippled your courage.
Therefore, before you get divorced, receive your King’s thanks. With deep concern, I have followed you in your lungs deed, mingled with sorrow
I have seen your pride with pride. Maintaining in peaceful pursuits the calm, self-sacrifice you have shown in the struggle, above all, maintains the love of the King and Fatherland that has led you. With Providence’s assistance, Denmark will still be able to hope for a happy future, although the near time will appear dark and threatening.
Be in peace what you have been in the battle, and you will contribute to the good of the Fatherland, as you have hitherto claimed its glory.
Copenhagen, August 8, 1864.
Christian Rex 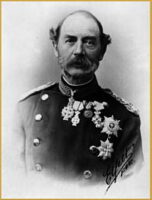 The soldiers returning home experienced an anti-climax. No flag, no welcome, but an almost insulting dismissive indifference.
Several accounts tell of how to make equipment and uniforms in order before the march in Copenhagen. There was no attention, however, and on the way one turned off and searched it, almost ashamedly, the nearest way to the barracks.
Several people say that upon returning home they were ordered to deliver the uniforms the next morning, and then resign. The fact that many of the soldiers only had the military equipment was not the problem of the army, and many had to beg for civilian attire in the garrison towns.
One is thus told to be sent home in dressing garb and another in some worn-out masonry work clothes.
The released prisoners of war were mocked at the Copenhagen corridor. Remarks like “cowardly dogs” and “where are the rifles ?” occurred.

The peace negotiations after the defeat took place in the old imperial city of Vienna and the Danish negotiators were put on an impossible task.
After months of rioting, during which German occupation troops set fire to the southern Jutland people, it ended with a purely German dictation. By the peace of October 30, Denmark had to surrender the duchies of Schleswig, Holstein and Lauenborg to the victors of Prussia and Austria.
As a result, we lost almost 40% of our area and population, and Denmark had become a low-income state of just 1.7 million. citizens.

At the peace, it was possible for the inhabitants of the former Danish areas to retain their Danish citizenship and at the same time stay in their home region if they they were not troublesome.

At the Prague Peace after the Prussian-Austrian War in 1867, Article 5, at the request of the French Emperor Napoleon III, gained a, if not other, symbolic significance for Denmark and southern Jutland. It mentioned an referendum about how Schleswig skould be divided.

There were no more military confrontations.
But 42 years later approx. 30.000 men from the now German region were discharged into service in the German army and had to fight on distant fronts during the First World War. 6000 of them were killed.

Actually there was a referendum in 1920 as a result of World War I.