The Counterattack at Fredericia

The ramparts of Fredericia

The Danish army that invaded Schleswig won the first battle at Bov, but soon had to give retreat, specially because of the Prussian help to the rebel army.
Large parts of Jutland were occupied.
The Danish army was not able to fight back from the Fredericia Fortress, because the ramparts had not been maintained for 100 years and was not ready for war.

A ceasefire was negotiated, which lasted until April 1849. However, this ceasefire had been so unfavorable to Denmark that they were almost looking forward to resuming the war.
The war was resumed in 1849.

The Danish army faced the Prussian general Prittwitz with a total of approx. 61,000 men and General Bonin, who led the special Schleswig-Holstein rebel force of14,000.
The Danish army was only 41,000 men, and they had to withdraw towards the island of Als and the Fredericia Fortress. Meanwhile the ramparts were made ready for battle, and parts of the Danish army  entered the fortress, while other parts evacuated to to Funen.

General Rye withdrew the Prussian main force and general Prittwitzfurthe up north into Jutland and ended up on the island of Helgenæs south of the peninsula of Mols, while General Bonin, with his Schleswig-Holstein force, was tasked by his superior to prevent the Danes from attacking from the fortress.

On May 7th, Bonin arrived with the army of 14,000 men to Fredericia and during the first week the first redoubts were built. From Rendsborg he had acquired 14 siege guns and already on May 16th a bombardement of the city began.

The shooting began at 3 am. The four 168 pound mortars were the most effective. 49 houses were destroyed and 200 damaged. The people fled to the Castle, where they felt most secure. However, several continued to Funen.
The bombardement had no effect on the city’s defense capabilities, and few human lives were lost. The fighting morale of the soldiers could not be weakened as long as the lifeline to Funen could be maintained.

Bonin’s subsequent move, therefore, was to build batteries that could better protect the jetties and shipping. The jetty at Strib was destroyed, but the Danes built several new jetties farther and farther east, so that they were out of reach of the artillery.

Instead, the artillery battle began on June 3rd  to 17th, when Bonin would make another attempt to terrorize the fortress. It became more and more of a decisive battle, and the Danish artillery did everything they could. It now became clear that the fortress’s artillery was superior to the attackers, not least by reach but also far more ammunition. Bonin’s artillery, piece by piece, were destroyed and could not be replaced. For example, half of the effective 168-pound mortars were destroyed.
At the same time, the attack force suffered much from the fact that June this year was unusually cold and rainy, and the morale was affected by the failed attacks.

Bonin became aware at this point, that outside forces were being brought to Fredericia. He had the opportunity to withdraw and secure himself against a Danish counterattack, or even cancel the siege and retire even further south. However, he chose to remain in the siege position.

A final Danish war council was held on July 4 in the Vejlby rectory on Funen. General Bülow maintained an overall counterattack from the fortress. The situation was favorable because the enemy was divided into four independent groups. In some places the gap between the groups was up to 1 km. wide.
Due to the reach of the Danish fortress cannons, there was also a great distance between the front line of Schleswig-Holstein and their camps where the reserves were located.

The battle at Fredericia

There were fierce battles around redoubt III, which managed to get rescue from the reserves behind. Only when Bonin pulled the troops back, the redoubt was conquered.
Redoubt V “Trelde skanse” also provided great resistance. The Danish troops surrounded it and intercepted the reinforcement from the underlying camp. Moltke succeeded with 1000 men in taking the redoubt defense, which was defended by 200 men. The brigades of the Schleppegrells and Moltke then surrounded the enemy armies and captured them.

The grave of General Rye

During the attack the Danish General Rye was killed. He was in front during the attack, constantly encouraging the troops.
It is said, that when the  6th Battalion attack was disturbed , Rye rode in the middle of the battle and exhorted: “Tell me, are there no officers here# ? and to the soldiers “Children! You have been following me all along, you would not fail your General now!”
Twice during the attack, his horse is shot away under him, and both times he continues on foot, but at 3 am he is hit by a gunshot in the thigh and another in the abdomen.
He exhaled shortly afterwards in the arms of a lieutenant.
Despite heavy losses, the joy and victory of victory was great.

Initially it was General Bülow’s plan to leave the troops in the terrain outside the fortress after the attack, but he changed his mind and withdrew all the troops into the fortress. The last troops were back in town by 8 pm.

From the early morning hours of July 6, the collection of dead and wounded began. Most of the wounded who could withstand transport were transferred to lazarets in Funen and the dead were gathered in churches and other places where there was enough space. The corpse of General Rye was first brought to Sct. Knud’s church, but later transferred to the Latin school where it was at lit de parade.

The approx. 210 dead rebels were buried in Michaeli’s cemetery on the night of July 7th and 8th. The attitude towards the rebels is quite well characterized by the fact that the priest, during the ceremony, referred to them as “traitors and perpetrators” (the Schleswig-Holstein soldiers had sworn allegiance to the Danish king). However, he added that the highest judge could grant forgiveness of sins. In addition, there were no ceremonies or military honors.
52 wounded rebels who subsequently died from their injuries were also buried here during the period 11th July to 18th August. Two rebels who had committed suicide were buried on a special place, since suicide was concidered unforgivable by god.

On the evening of July 7th, the engineer troops and a work team of approx. 100 men dug the large common grave at Trinitatis cemetery. The site already contained 60 dead from the battles at Kolding and Gudsö as well as victims of the initial bombardement of Frederica.

The funeral
The 22 dead officers were taken to Michaeli’s church
The dead petty officers and privates were placed on the paths around the grave as they were taken to the cemetery during the night. Here they could be identified, on the basis of destingtions, unit marks, soldiers’ books or companion statements, one by one applied with a note, showing rank, number, name, unit and place of birth.

When the great tomb was finished, they immediately began to put the dead men in the grave. This happened in unit and regimental order.
On a sloping ramp, the corpses were carried down and put in place in the grave, dressed in their uniforms and wrapped with their cloaks drawn over their heads. They were laid in two long rows on their backs and with their feet facing each other. When the bottom was filled, a layer of crushed lime was sprinkled and then a new layer was started. This continued until everyone were put in the grave.

The next morning at approx,  11 am, the grave, without any kind of clerical ceremonial, was covered. A seat was kept open in the north for the officers, who were buried following a ceremony in Sct. Michaeli’s church a few hours later. After this, the bodies were brought to the great tomb
For several years after, the large tomb had to be filled several times with extra soil due to the compression.
A total of 458 soldiers rest in the grave, of which 376 died during and immediately after the counterattack.

On the occasion of the successful counterattack, the Fredericia Victory Reveille was composed.
Fredericia_Sejrs_Reveille_KGL_LG  (mp3) 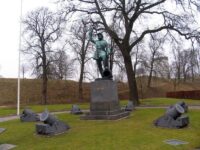 The tribute to the common soldier

At Fredericia a atatue and a memorial was raised.
It is a tribute to the heroic common soldier. As far as we know, the first memorial in the world that salutes the fighting and dying common soldiers. It’s called “The Brave Soldier”