There were a number of other batteries that were not part of the Sicherungsstellung Nord, but which had an impact on the military defense of the region. It is not possible to define the the guns in the FLAK batteries.
The pictures represent types of German FLAK from WW1.

2 FLAK batteries (FLAK = Flug Abwehr Kanone) anti-aircraft guns belonging to the Tønder airship-base (the Zeppelin base) Accommodation for the crew A was arranged in a burial mound, with entrance from the east and west respectively. On the walls of the rooms and hallways were shelves on which the 1800 rounds to the battery was located.
The battery had one single opportunity to get into battle. They were alerted when the English airplanes bombed the Tönder airship-base (The first air strike i history from a carrier) in 1918.
But the battery failed to take part. The crew were Catholics, had a religious weekend party and no one took the phone when the battery was alerted.

The coastal battery in Aarösund:
This battery was part of the naval base Aarösund.
The main task was to protect some minefields in the strait Littlebält.  The battery had 4 pcs. of 10.5 cm. guns placed behind ramparts. Most likely haubits. In the middle of the battery was the command post, and a large ammunition magazine was built into the slope behind the battery.
The command post also controlled the battery Aarö.

Battery Aarö:
Battery under the Naval base Aarösund.
One of the navy’s horse-propelled 15 cm haubitz batteries was installed here for a period of time.
In 1918 4 pcs. of 10.5 cm guns arrived that installed  before the war ended.
To the north was a very modern fire control post with a powerful floodlight. From here, both battery 1 and battery 2 could be controlled directly per. telephone.

The Battery Stevelt:
Another battery under the Marine Station Aarøsund. It was probably a 4 pcs. of horse propelled 15 cm.
It was later expanding to a total of 6 guns. The task was to protect minefields and the entry to Haderslev Fjord. 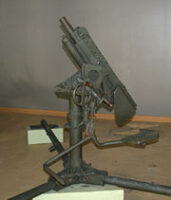 The Battery Tved:
Flak battery under the airship base in Tønder.  The type and the caliber is unknown.

The Battery Abild:
It was a FLAK battery under the airship base in Tønder. The type and the cali ber is unknown.

The Battery Hömlund:
Marked site at three burial mounds south of the Spandet-Ribe road, approx. 500 metres from the then Danish border. The task was probably to shell the road from Ribe. The type and the caliber is unknown.