The Battle at Mysunde february 2’nd 1864 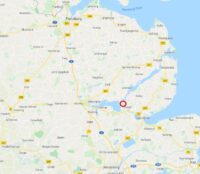 The Prussian and Austrian forces began the war in 1864 by crossing the river Eider on February 1th, 1864 with a force of 57,000 soldiers.
Their most important task was to defeat the  Dannevirke stronghold. The plan included an attack on the advanced defense position at Mysunde, thus securing and use the crossing over the fjord Slien to bypass the Danish Army from the left wing of the stronghold.

In 1862, shortly before the outbreak of the Second Schleswig War in January 1864, the rampages and redoubts at Dannevirke had been reinforced at the same time as the construction of the redoubts at Dybbøl and the Fredericia fortress. 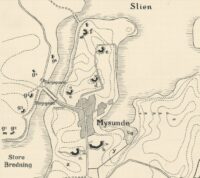 The position in Mysunde formed part of the eastern wing Dannevirke, taking advance of the water blocking any advance.
The Danisk  General Staff was fully aware that this needen to be defended, In connection with the fortification works two years before, it was among other things surgested , that som actions was taken in front front of Mysunde and Dannevirke, the socalled Kokkendorf Stronghold.
This was never constructed because the vast majority of the funds went to Dannevirke itself, on behalf of  both Dybbøl, Fredericia and Kockendorf. .

Tis winter was unusually cold, and the fjord kept freezing over.
The outposts at the four redoubts at Mysunde could accommodate a company, approx. 2500 men and approx. 20 guns.

On February 2, the 1st Prussian Corps with two infantry divisions advanced towards Kockendorf on the eastern front. The Prussian force of approx. 10,000 men with 64 field guns. The plan is to occupy Mysunde, and thereby bypass the Dannevirkestilling. The only obstacle is the 2000 Danes and their cannons in the Mysunde redoubts.
As the Prussian advance is recognized, the outpost companies at Kockendorf are withdrawn to Mysunde.
When the Prussian commander-in-chief Prince Friedrich Carl discovered that the Danes had escaped Kockendorf, he orders advance and attack against Mysunde allready the same day.

The narrow water the Prussians tried to cross.

When the German avant-garde with 3 battalions arrived, the Danish companies immediately came under strong shelling. After some losses, the Danish companies were ordered back to the redoubts . What had at first looked like a hostile reconnaissance, now turned out to be a regular attack on the position and the city.
On the right wing, a Prussian company managed to conquer a trench just 100 meters from the barrier b, and from here the crew of the Danish cannons were now taking af heavy rifle fire.
Also in the center, the Prussians were close, only approx. 200-250  from the escarpment.

By noon the German General v. Mannstein had arrived and taken command of the front. He ordered a heavy bombardment to force the Danes out of the city. For this he had parts of 3 regiments as well as a considerable amount of artillery.

At 12.45 pm, the Prussians opened fire from a position 500 m from the Danish positions with a 6-pound battery and a haubits battery. Shortly after, the reserve artillery arrived, which was immediately deployed with 3  12-pound batteries, 2 haubits  batteries and 4 horse-propelled field batteries.

The Prussians had now deployed a total of 64 canons  – more than three times as many as on the Danish side.
There was a fierce artillery battle, but an unusually dense fog prevented an effective fire. You could pretty much only aim at the enemy fire from the cannons.
The heavy firing now gave the Danes the presumption that the Prussians were preparing to attack the Danish positions. In the redoubts the 3rd Brigade was in reserve, which from the start of the artillery battle was ordered to reinforce Mysunde.

While awaiting the Danish brigade, two companies were withdrawn from guarding the coast northeast of the city. In addition, a battery had arrived at Mysunde at noon and had been set up on the western shore of Slien. However, it did not take part in the fight except for a few shots.

The attack on redoubt A and B

During the artillery battle, the Danish gunners were under severe shelling from the conquered trenches only 100-200 meters away.
Especially in redoubt b the Danes suffered losses.  A company was therefore sent forward to enforce the Prussian infantry back, but was forced retreat to the redoubts by a fierce Prussian gunfire.

From the Ornum Mill, about 120 meters from the Danish ramparts, and from the road towards Mysunde, several enemy battalions advanced towards the city. During this advance, the enemy allowed their artillery to follow the infantry and thus closer to the Danish positions. However, this had only limited effect. Most of the grenades went too high due to the fog, and only 3 Danish guns in shot b were dismantled.
In contrast, most of Mysunde town was set on fire.

Several times it seemed that the enemy was preparing for an attack, and each time was subjected to heavy artillery shelling against the infantry.
In order to prevent the enemy from cross the road, which led between junctions a and b to the crossing point, two guns were placed so that they could cover this area.  Almost at the same time, the hostile fire diminished, to be fully stopped at four o’clock.
The Prussians had given up on conquer Mysunde and withdrew.
On both sides the losses had been great. The Danish casualties were injured and died: 9 officers and 132 NCO’s  and privates .
The Prussian casualties were 12 officers and 187 NCO’s and privates.

The battle was perceived as a Danish victory and it strengthened the morale of the soldiers who had fought against, and rejected, a superior force. Also among the population, both morale and confidence in Dannevirke were strengthened.
But it also perhaps gave an exaggerated picture of the ability to defend the position. Therefore, the withdrawal from Dannevirke 4 days later seemed extra sissapoing, not only for for the army, but perhaps especially for the Danish population, who had seen Dannevirke as an impassable fortress, which once again had to stand its test against the enemy from the south.

Together with Sankelmark, Mysunde was the only battle  that could be regarded as Danish victories in the war. However, it was victories that only postponed the inevitable.
During the attack, the huge Danish Army came under heavy fire, and yet the attack was rejected by the Danish Army . The weather made everything invisible, either fog or snow fog, which made it very difficult to orientate or hit precisely with the artillery.
The poor visibility caused that a large part of the Prussian fire to accidentally hit the town of Mysunde, where half of the houses in the town burned down.

Many of the soldiers that were killed on both sides are buried at cemetaries near by.
The most Danish at the KOsel Church, in a unmarked grave. 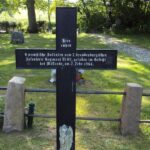 Prussian grave at at Mysunde 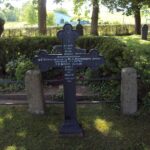 The grave of Julie Milord

They were rebuilt shortly after with extensive assistance to the residents of the local landlord Julie Mylord.
Many of these houses carry her initials “JM” and several have walled cannon balls in the facade.
Julie Mylord is buried at Kosel Cemetery where also a large number of the fallen from Mysunde are buried in an unmarked common grave.