The Battle at Sankelmark february 6. 1864 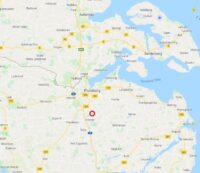 The Danish retreat was decided on a staff meeting february 4.th in the afternoon.
After preparations all the next day, the Danish army began the retreat from Dannevirke at 5.30 pm and the stronghold was abandoned at 11.30 pm.

It took 7-8 hours before the Prussian and Austrian generals learned about the retreat.
A furious blizzard was raging, which made any kind of reconnaissance almost impossible.

Allthough the retreat was only poor planned and under influence of the weather, the Danish army succeeded ind abandon the stronghold and go north at Flensborg. They had time enough to secure their rear guard against attacks from the back under the retreat.

For whatever reason, this message did not not reach the Austrian headquarters until 4 o’clock the next morning, which gave the Danes a much needed lead.

In the morning of February 6th,  Austrian cavalry was sent after the Danish army. Observing tHe Austrian cavalry thw rear guard (arrièreguard) entrenched itself in the narrow pass at Sankelmark, where some major roads were crossing.  These were situated between a ridge to the east and Sankelmark Lake to the west.

The battle itself was exceptionally bloody, because both the Danish colonel Max Müller of the 7th and 11th regiments of the 7th Brigade and the Austrian commander decided that the battle should be fought in close combat.
The 1. Regiment was set up in the flat and narrow terrain on both sides of the road and the 11th regiment a few hundred yards behind. The battle began at 1 p.m.
At 3.30 pm the 1st regiment attacked the Austrian force with heavy casualties. 11th Regiment followed up with another attack but had to pull back.
The battle ended at 5 pm when it got dark.

The Danish casualties at Sankelmark were 763 men, of whom 53 were killed, 157 wounded and the rest captured. On the Austrian side, 95 were killed  311 wounded and 27 missing.

This battle gave the Danish army the opportunity to continue their retralt to Dybbøl and Fredericia.
The exausted and freezing soldiers reached the Dybböl Stronghold during February the 7th.

The story went out that the Danish Army once again noted that “they succeeded in stopping the Austrians and securing the army retreat” – allmost the same reasoning as after Selk (Kongshøj).