Nursing and the Red Cross

In line with the army’s advance, fiels hospitals lazarets were set up in larger buildings such as castles, churches, schools, parsonages and larger private houses.
The military’s doctors were in charge, and the nursing and other work was performed by hospital helpers,   civilian women who offered their help and and for the first time, professional nurses, partly the Protestant deacons and partly nuns.

The wounded were often in a nasty condition when they arrived. As the battle raged, there was little help to be gained, and those who could not drag themselves back, had to wait for the fighting to end before the dead and wounded were gathered. Afterwards, they it was loaded onto a horse-drawn carriage and brought to the nearest field hospital. Until they arrived here, many had died from their wounds of by shock.

Getting injured at that time was serious. Not least given the complex damage caused by a war. But the lack of even the most elemental things like chloroform for anesthesia and the very primitive conditions that prevailed, made even minor injuries fatal. Bacterial infections were not known.

In the aftermath of major wars a lot of surgical experience arises, and in 1867 “Lehrebuch für allgemeine Kriegschirugie” is published. It was based on the last experiences of the Second Danish-Prussian war in 1864.
Amputations were the most prevalent cure for complicated fractures and gangrene, sometimes without anesthesia. If the patient did not die from the shock, the wound was followed by almost certainly inflammation. This could lead to gangrene, almost always leading to the  death.
The cure for inflammation (In Denmark called ulcer fever) was cover with ice.

The doctors were able to amputate quickly, and they knew a lot about war injuries. A skilled doctor put a leg off his thigh for about 5 minutes, which for an insufficiently anesthetized patient must have seemed like an eternity.

In 1864, care for the wounded was left to volunteer nurses or nuns who worked on both sides.
During the bombardement of Dybböl on March 16th, a lot of Danish soldiers were killed. The wounded were transferred to the field hospital at the Augustenborg Castle, many suffering of severe wounds.

The same evening, the Swedish sister Lovisa, wrote to the Danish Deaconess Foundation:
“Today, more farms have been burned, and where the enemies are not burning, they send grenades. Such grenades today have been smashed into a Danish company. A large number were killed and the wounded came to us. Peaces of lead are like little fists sitting in the poor people when they are brought here, and here come the wounded night and day. “ 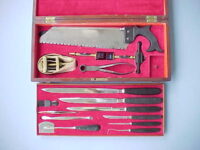 The hard fighting at Dybbøl can be read in other letters from Sister Lovisa:
“Here is now so many wounded that the whole castle church is also full. The beds consist of straw with a wool blanket for each person. Immediately in the morning the operations begin. Arms and legs are amputated. It is difficult to see so many young people suffering.
In the evening, candles are lit and surgery continue. After all, we have to make sure that the bloody cases are carried out and that the doctors’ instruments are cleaned up, then aired and scoured. “
During these March days, five surgery doctors were still working in the operating rooms, and in a single day the number of amputations reached sixteen.

The number of the dead in the field hospitals was high.
Most of the surgeries performed were amputations, and wound infection and bleeding were frequent and feared complications. Contributing to the heavy casualties was also the slow transport of wounded on the battlefield to the nearest field hospital,  just as the combination of wounded and sick, many with typhoid, took its toll.

Transport of the wounded

In connection with the German conquest of Als, the Lazarets were overcrowded, and deacons from the German field hospital in Broager were called to help in Sönderborg.
One of the Kaiserswerth sisters wrote:
“When we came to Sonderburg, the capital of Als, a city appeared to be heavily included in the war events. Through the deserted streets came a multitude of soldiers, horsemen, horses, chariots and occasionally the groans of severely wounded. These were brought to five field hospitals – in the three windmills, a tent and a larger civil house in the town.
The doctors’ work was outrageous. For three days, neither they nor we escaped from the operating tables.”

Another wrote:
“Our hospitals are never empty anymore. It’s awful where people die between our hands. The big tent where the sick are going to stay is finished and many are already carried in. We sisters live at each of the three mills. sleeping on straw sacks. Beds are not obtainable. The few we have, of course, go to the most seriously wounded. Until now, everyone who has died, has been buried without a coffin.
It is horrible to see how the dead are loaded on wagons three to four on top of one another and then laid in a hole without ceremony. I have alarmed all the doctors and officers, and now coffins must be obtained, four corpses is already waiting. waiting for them. “

The Committee of Five Geneva 1863

What we know today as the Red Cross was established under the name of the International Committee of the Hilfsgesellschaft für die Verwundetenpflege (The Permanent International Committee for Assistance to Wounded Soldiers) in 1863 following an idea by the Swiss Henri Dunant.
He experienced the Battle of Solferino 24-6-1859, the last battle of the second of three Italian wars of independence against Austria.

An Austrian army of 120,000 men and 450 pieces of artillery that had been positioned on an hill, was  attacked by a French-Piedmontese force of 118,600 men with 320 pieces of artillery. The Austrian lines were broken and their counterattacks fought back by the French.
The losses amounted to 17,000 French / Italian and 22,000 Austrian soldiers. Even at that time it was a horrendous loss.

Dunant mobilized a team of volunteers who, regardless of friend or foe, helped the wounded soldiers. This impartial principle later became one of the Red Cross’s most important.

Henri Dunant’s idea was that every incompetent soldier was entitled to help and protection, and he called for the National Auxiliary Corps, which could take on the task of rescuing fallen soldiers. At the same time, he suggested that a common international set of rules should be written for this work.

In 1863 in Geneva, the physician Louis Appia was invited to join the “the Committee of Five”. This committee had to go through Dunant’s ideas and see if they could be put into practice.
That same year, the first Geneva Convention was signed.
In October 1863, Appia suggested that the organization’s envoys should wear a white armband as a hallmark. Another member of the committee, General Henri Dufour, added a red cross as we know on the white floor. Switzerland flag with reverse colors.

The first time the Red Cross set foot on a battlefield was in the Danish -Prussian war i 1864.

Every year, on the day for the establishment of the International Red Cross, there is a ceremony at the memorial at the Dybböl Redoubts 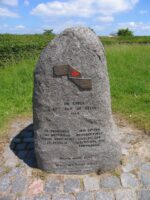