HAWK at the Stevns Fort

1952 The development of the HAWK missile system begins. U.S. Army initiates development of a system of medium range semi-active radar homing surface to air missile.
1954 Northrop receives the order for launcher, radar and four control systems. Raytheon gets the order on its own missiles.
1956 First trial launch of HAWK under the name XSAM-A-18.
1957 Development ends. The project is renamed from XM3 and XM3E1.
1959 The system is introduced in the U.S. Army.
1960 The system is introduced into the US Marine Corps.

Denmark, like other NATO countries, was offered four HAWK missile batteries as weapons aid from the US in addition to the four NIKE missile batteries already received.
The Hawk batteries were placed adjacent to the NIKE system. They were stationed in a circle around Copenhagen to protect the capital from air strikes.

In 1983, Eskadrille 541 was moved from the Middelgrund Fort to the Stevns Fort. Gradually the fort changed character from coastal fort to air defense missile firing area.

From 1989 to 2000, the Squadron 541 at the Stevns Fort served exclusively as a training squadron for the entire Air Force group. During that period, the squadron reached the training of 2800 people.

In 2000, the squadron was closed down and the fort was now only the communications center for the Navy.
There were 6 launcher areas (3 Alpha and 3 Bravo) where the missiles were mounted on each of their mobile launcher ramps. In the launcher area, there were 9 launchers (3 × 3) and a command center.

IBCC (Improved Battery Control Central). From here, HAWK as a full or half unit was controlled with tactical and data communication to the other HAWK units under the authority of ROC (Rocket Operations Center 1966-71) SOC / CRC (Sector Operation Center / Control and Reporting Center
The crew consisted of:
1 TCO (Tactical Control Officer) responsible for the unit’s air defense operation.
1 TCA (Tactical Control assistant) who assisted TCO in his function and in addition served IPAR and
IFF and target detection and identification as well as reception of target detection alarms from CWAR
operator ASO (Azimuth Speed ​​Operator)
2 FCO (Fire Control Operator Alpha and Bravo) each operating their IHPIR and three launcher (LCHR) at
performing commitment to the goals assigned / designated by TCO. 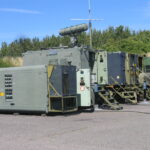 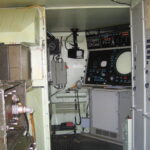 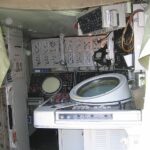 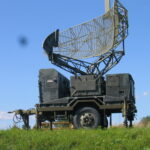 Hawk is an acronym for Homing All the Way Killer. The control system is called Beam Rider. The missile is controlled by receiving the back-reflected radar signal from the target illuminated by the IHPIR in the front antenna. The missile control unit then calculates the hit point and guides the missile up to the point where the explosive charge is detonated. 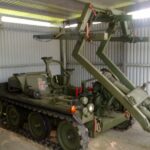 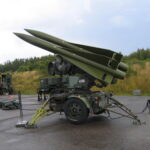 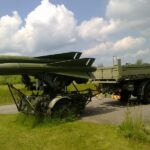 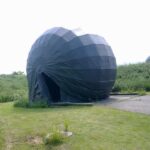 To change and maintain the launchers, there were a number of loaders and transporters.
The firing range consisted of a Fire Section Alpha and a Fire Section Bravo. (See the map at the top of the page. Each section could be divided into two independent units, where IPCP was used for the half that used ICWAR as a search radar.

Each launcher in the launcher area were surrounded by semicircular ramparts that would cushion the pressure and bursting effect of any blasting missiles at the LCHR.