In 1963, Denmark was offered a HAWK battalion (four squadrons) as a weapons aid from the US in addition to the four NIKE rocket batteries already received in 1959.
The HAWK system was developed to counterattack the low level airplanes.
(See the page Hawk at the Stevns Fort for a more detailed description of the HAWK system) 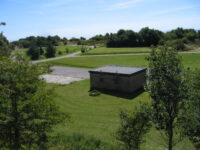 In 1965, the HAWK Squadron 543 was installed at Stevns by the Höjerup Lighthouse.
The firing area  consisted of 2 launcher sections, a radar section and a command center. The firing range is right next to Höjup Lighthouse.

Inside the gate and the main guard there is a maintenance area.

Behind the power station, a road leads down to an emergency area. Here you could set up loaders, radar trailers and more.
The tiles laid down in the asphalt could indicate that the material presented here was relatively heavy and had three support plates. The vertical concrete walls have to prevent the spread of fire. The plant was initially covered. 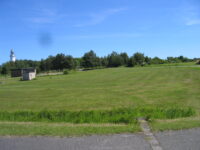 Today, the former shooting area is owned by Stevns Municipality. A wonderful and well maintained area