War in the Horizon

The peace after the First Schleswig War now created problems, as the war decided nothing
The London Protocols of 1850 and 1852 together constituted the peace agreement after the Three-Year War and settled Schleswig and Holstein’s relation to the Danish monarchy.
The first London Protocol was signed by the two great powers Prussia and Austria on August 2, 1850,
following pressure from Russia. By this they accept the integrity of the Danish Kingdom.

The second London Protocol was signed by England, France, Russia, Prussia and Austria on May 8, 1852, and was later ratified by Denmark and Sweden. It stated that the Danish monarchy consisted of the Kingdom of Denmark with the duchies of Schleswig, Holstein and Lauenburg, and that Prince Christian of Glyksborg should inherit the Danish throne.

This protocol required an amendment to the Act of the Danish Throne Heritage, which was implemented by the Danish parliament.
Under Russian pressure it was also decided that the June Constitution should continue to apply only in the Kingdom. The form of governance in the duchies should continue to be monarchical.

Prussia and Austria were included in the provision that the Duchy of Schleswig should not be closer to Denmark than the Duchy of Holsten, and thus the superpowers had a direct influence on internal Danish affairs.

The London Protocol stipulated that monarchy should continue to apply in the duchies, even though Denmark had a democratic constitution. The common constitution of the Danish whole state (the kingdom and the duchies) was to ensure that the common affairs of the state could continue to function, despite the different modes of government.

But in 1858 the German Confederation had repealed the common constitution for the Duchies of Holsten and Lauenborg, as these two duchies were at the same time members of the German Confederation. In the joint Danish-Schleswig-Holstein government (the National Council), there were conflicts between the democratic politicians from Denmark who wanted reforms and the noble representatives of Holsten who wanted a very conservative course.
The liberal forces in Denmark therefore considered it increasingly inevitable that Holsten had to be separated from Denmark. Ultimately, it was feared that Holsten, through its role in the National Council, led to German interference not only in Schleswig, but also in purely Danish affairs.

The Liberal forces in Holsten agreed to this extent, but they also wanted Schleswig to be disbanded and that a union of Schleswig-Holstein should be established within the German Confederation.

The November Constitution.
The Danish Parliament adopted shortly before Frederick the 7th’s death in November 1863 the November Constitution.
There was a strong nationalism in the Danish public, which pushed the political system to demand a Denmark for the River Ejder, and they hoped for a Scandinavian alliance.
In 1863 the government chose a definitive course towards “Denmark to the River Ejder”.

It presented a proposal for a common constitution for Denmark and the Duchy of Schleswig, which was adopted by the Danish Parliament on November 13th, 1863. The constitution replaced the previous one-state constitution,  and meant common affairs for Denmark and Schleswig, but not Holsten. Schleswig should have its own Schleswig Landdag (lokal parliament), Denmark still its own Parliament.
In this way, it would be possible to rule out the Holstein representatives of the national council, which caused the Danish government to be partially paralyzed.

This immediately solved a constitutional problem, but at the same time Denmark broke the rules of the London Protocol of 1852. According to this, it was not possible to associate Schleswig more closely with the Kingdom than Holsten.

The government dissolved in December 1863 and was replaced by the ministry lead by Prime Minister D.G. Monrad. Common to both governments is Secretary of War C.C. Lundbye.

The national tensions.
The November Constitution aroused strong opposition among the Germans in the duchies and throughout Germany. German national opinion was now offered the opportunity for revenge after the rebillon war 1848-50.
The German Bundestag (parliament) in Frankfurt talked about releasing the dukes for the dependence on Denmark and creating a new German state from them. The German rebels’ dream of a Schleswig-Holstein state had suffered defeat in the 1848 to 1850. In Schleswig itself, the mood had since then been calm, but bitter and contradictory.
By the 1850´s the language scripts had been implemented in central Schleswig, which meant that Danish should be the school language in the areas where the population spoke Danish (Southern Jutland).
The church language alternated from time to time, while the judicial system and administration were bilingual. However, in the northernmost part of Schleswig remained purely the Danish language, and the southernmost part remained purely the German language.
The purpose was to slow down the decline of the Danish language, but the reforms were introduced by the government without much debate. It aroused the anger of many Germans, as they had for centuries been accustomed to German being the dominant language.
The Germans therefore saw the language scripts as an attempt at “Danization” and Danish oppression.

The ambitions of Prussia.
However, Prime Minister Otto von Bismarck in Prussia was not interested in strengthening the liberal forces of the German federation with yet another state, ie. an independent Schleswig-Holstein. He therefore allied with Austria, officially to press Denmark to comply with the London agreement’s provisions on the freehold of the duchies, but in practice in the hope of conquering Schleswig and Holstein for Prussia, which he later told in his recollections.

The Danish army began mobilization in the fall of 1863 and the 72-year-old general Christian de Meza was assigned the command. Denmark was ill-prepared for war. The army was under reorganization, the commanders were poorly trained and there were too few officers. There were also problems with the transport and supply units.

The situation was tightening in the following two months after the Danish adoption of the November Constitution and the Prussian Chancellor Bismarck diplomatically ensured that the possible alliance partners for Denmark such as Sweden-Norway and England declined.
At the same time, Denmark’s former allies, Russia, were weakened after the Crimean War 1854-56, and Prussia was now unequivocally the continent’s strongest power, politically skilled led by Chancellor Bismarck.
He was aiming for a military confrontation with Denmark to free himself from international agreements restricting Prussian military and political freedom of action. At the same time, he needed diversion for some domestic policy issues, including the military service period.

Especially the Dansih relationship with Sweden-Norway was important, as Danish politics was characterized by wishful thinking at this time. It was believed, and acted, that military aid would come from Sweden in the event of a war with the German states. Up to 22-25,000 men had been mentioned.

With the November Constitution, Denmark had violated international agreements on how it should treat the duchies. This now provided a legal opportunity for German military intervention.
Despite massive pressure from friendly powers and despite Sweden-Norway rejecting any idea of ​​an alliance, Denmark did not withdraw its Denmark-Schleswig constitution.
As a result, the German forces threatened to occupy Schleswig as a mortgage until the constitution was withdrawn. However, despite this and despite the fact that Hanoverian and Saxon troops had already occupied Holsten and Lauenburg on December 23rd, Denmark did not shy away from its position.

On January 16th, Prussia and Austria faced an ultimatum Denmark to repeal the constitution within 48 hours. It was in fact completely unrealistic as it could not be reached and no attempt to extend the deadline was accepted.

On February 1, 1864, Austrian and Prussian troops exceeded the River Ejder and the Second Schleswig War was a reality.

The Prussian Major General Helmuth von Moltke had already in 1862 been assigned the task of preparing a campaign against Denmark. Most of all, he had completed a landing og troops at Zealand and, via an attack at Copenhagen, received a surrender. However, this was not realistic, so the second best solution was to have the Danish army assembled at the Dannevirke stronghold, most preferably in the winter, when the adjacent wetlands were frozen and could be used for a quick bypass and annihilation of the whole army at once, so “the Danish government had its weapon dropped and thus abandoned. “

Major General Helmuth von Moltke, Military Strategist. (1800 – 1891.)
Enrolled at the Land Cadet Academy in Copenhagen as an 11-year-old. Seeked his resignation from the Danish army as a second lieutenant in 1821. He then joined the Prussian army. 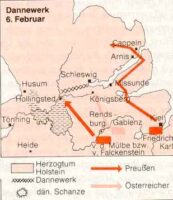 It was aimed at destroying the Danish army in just three days.
Day 1
Corps I crosses the eastern part of the River Ejder at four crossing points whose roads lead to Ekkernförde or Mysunde. The enemy is fought down the road so Wittensoe or Eckernförde is reached before sunset.
Corps II attacks the Rendsborg fortress and defeats the enemy. The front crossing crosses the Ejderen via the fortress and continues towards the Sorg River.
Day 2
Corps I advances to the line Holm – Kosel. If the Slien is frozen and allows the crossing to be demarcated at 11 am, otherwise the 6 am demarcated for the purpose of fighting the Mysund position and getting ready for construction of the bridges over the fjord Slien for the landing the next day.
Corps II shoots its outposts up to the position Kurgraven. The main force passes the River Ejder and goes into position between the flooded Reide Å and Over Selk together with the Prussian Guard division that is not yet fully formed as Corps III.
Day 3
Corps I crosses the fjord Slien either by bridging or over the ice, attacking the enemy in the back and destroying him. If the enemy is on the retreat from Dannevirke, the corps goes via Store Solk towards Flensburg to cut off and fight him.
Corps II and III attack The  Dannevirke stronghold central sector between the Oxe Path and Bustrup to bind the enemy troops, penetrate the lines and participate in the destruction of the enemy.